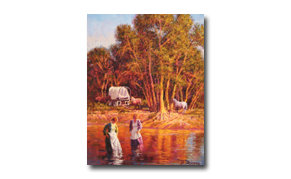 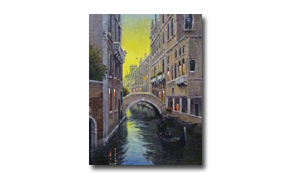 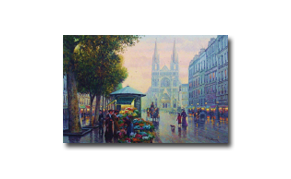 In 1996, Greg was appointed by the Governor of Idaho to serve as a Commissioner on the Idaho Commission on the Arts. In 1996 and 1997, Greg served the commission on the Policy and Planning Board and as Chair of the Individual Artists Committee.

Pioneer Paintings: The inspiration for Greg’s pioneer scenes comes from American history. Having grown up in the Rocky Mountains, he draws from the experiences of his youth to capture the essence of the American West. He strives to portray the courage and nobility shown by those pioneers who crossed the plains, and he seeks especially to show the lives of pioneers on an individual basis. For the past ten years Greg has traveled extensively in Europe, painting "Plein Air" in Paris as well as in the European country side, including the Italian and French Rivieras, Venice and Rome, Madrid and Barcelona, Budapest, Strassborg, England, Wales and Prague. He uses historical books and images to place the streets and figures in the 18th century, adding a sense of romance and history. The monuments and historic landmarks of the cities of Europe provide beautiful icons in these city scenes, and allow all who see his work to experience both the time and place depicted.

A unique form of impressionism can be seen in Greg’s style. Many of the early impressionist styles were far more detailed than most realize. Though Greg’s paintings appear to be quite detailed, a closer look will reveal expressive brush work and charming impressionistic textures. As an artist, Greg feels that his work can affect people on many levels. He enjoys painting a variety of subjects and themes, and is always finding new ways to express his romantic leanings.