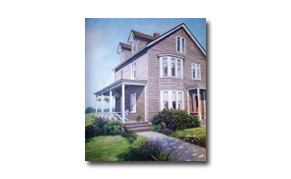 Henry Peeters is the nom de plume for Hing Biu. Mr. Biu was born in Canton Chin in 1951 and. attended the Canton Fine Art University, graduating in 1972. Exhibiting throughout China he received many national awards. In 1974 became the art director of a prominent film studio. He moved to the United States in 1978 experiencing tremendous success. His art soon became eagerly collected. Mr. Biu began using the name Henry Peeters when he started to paint a series of impressionist style landscape paintings using impasto application of paint with a palette knife. This style too afforded Mr. Biu/Peeters tremendous success and his work is now recognized internationally, making him a major force in the art world. The masterpiece in our collection is rare indeed not only for its size but also for its combination of the best of Mr. Biu's techniques. The home and sky employ his masterful realist technique reminiscent of Edward Hopper and the garden hints of his unique impasto impressionist technique, creating a one of a kind masterpiece.