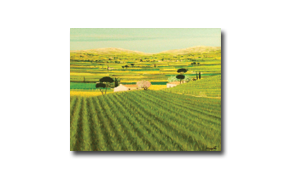 Dominique Dorie was born in Versailles in 1958. At the age of sixteen he began working in the Louvre as a restorer of sculptures. He had several small "exhibitions" by hanging his work in the evenings on the fences of the church of St. Germain des Pres. In1977 Dorie. won a scholarship offered by the city of Paris that enabled him to enroll in a night course in drawing. From 1974 on, Dorie had participated in a number of exhibitions in towns surrounding Paris. He also had two one-man shows in Paris and one in Strasbourg between 1982 and 1984.Though Paris is the center of art in France, working there can be accompanied by many distractions. At the age of twenty-four Dorie decided he needed surroundings with greater calm, greater quiet, so he moved to a small village on the edge of the sea in Normandy where he has worked to improve his handling of both light and color. The artist who hung his work on the fences surrounding the church of St. Germain des Pres has traveled a long distance. In 1985 he exhibited his work in the Salon de Criel and in the Salon d'Orly. He was awarded the Prix du Salon in the latter exhibition. In 1984 and 1985 he exhibited in the prestigious Salon d'Automne. In 1986 he won the Medaille d'Or at an exhibition in Deauville. His awards include the following: First Prize Galerie d Art d'Orly 1985,Gold Medal 37th Grand Pnx International de Peinture de Deauville 1986,Jury Member 38th and 40th Grands Prii- Intenationaux de Peinture de Deauville 1987/1989, Honorable Mention Salon des Artistes Francais; Paris 1988,Chevalier Palme Academique (Silver) Academie Internationale des Arts Contemporains Belgium 1990. The recent tremendous surge of the prices realized at auction for Dorie’s piece is a testimony to this modern master’s talent and appeal.