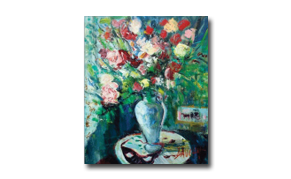 Dauchot was born at Gargan-Livry near Paris May 10, 1926. His father was an architect. He began painting at age fourteen, encouraged by his parents. After attending the Ecole des Beaux-Arts, he followed the advice of Yves Brayer and Othon Friesz. He admires Utrillo and Soutine. His efforts and aims are for unity and moderation, and after varying his techniques he tends to attach himself to the pictorial "matière" which he incorporates into his subjects. Above all, he wants to remain human. He has been defined as a painter of tragic reality. In Paris he has exhibited at Cardo's and at the Galerie Durand-Ruel; special exhibitions of his work have been held in Los Angeles, New York, Geneva, Zurich, Basle. He is currently experiencing tremendous success internationally and his piece have been auctioned at auction houses throughout the U.S. and Europe and the prices realized are a great tribute to one of the great artists of our time.