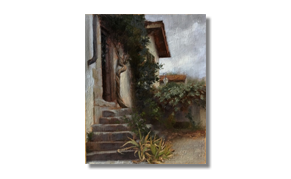 Realist painter Kamille Corry was born in 1966 in Houston, Texas. Her art education took place primarily in Florence, Italy from 1987 to 1990 where she pursued etching studies at Il Bisonte and drawing and painting at Studio Cecil-Graves. Corry also trained extensively with painter D. Jeffrey Mims in Florence and North Carolina. She was later an assistant instructor to Mims at The Florence Academy's summer workshop.

Corry has exhibited throughout the South, including Washington, DC, and at New York's Salmagundi Club. Numerous shows in her beloved Utah have showcased her paintings. Awards include the prestigious Elizabeth Greenshields Foundation Grant, the Director's Award for the Spring Salon at the Springville Museum of Art in Utah and the Achievement Award for the Florence Academy of Art Alumni Exhibition in San Francisco, California.