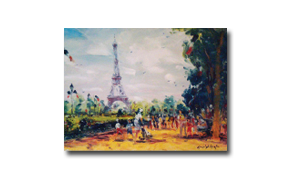 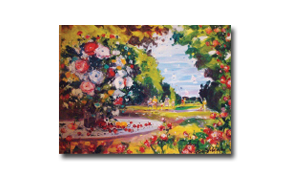 Born in 1933 in Paris, Yoldjoglou is of Greek origin. At the age of 19, he gained a competitive entry to the "Arts Décoratifs". He became in turn : a graphic designer, commercial artist, a prize winning designer of State coinage, (Grand Prize of the most beautiful coin of currency, Baltimore USA 1993 ), illustrator art books ("Belles Saisons" of Colette with original lithography and Publishings of Pierre de Tartas ), but at heart, he remains essentially a painter, as is demonstrated by his numerous exhibitions, distinctions, famous museums in which his works are exhibited (Paris, Versailles, Cannes, Antibe, Avignon, Peru, etc.), and in Private Collections (Baron Rothschild, Prince de Polignac, S.A. La Begum, Aga Khan, Baron Empain, Olivier Dassault etc.). A post-impressionist painter, he is a past master at being able to capture all the elements of nature : wind, air, water, sun with which he has a special affinity. Could this be due to his Greek origins? His intense feelings are shown by his treatment of light and color, which take priority over the portrayal of exact shapes. He likes painting in the open air, as he says "A moment of truth passes by at that time". Most recently a book has been written, in France, paying tribute to George Yoldjoglou and his great works. Indeed, Yoldjoglou is one of France's important 20th century contemporary impressionists. His roster of gallery expositions throughout France as well as other countries goes uninterrupted from 1952 to present.